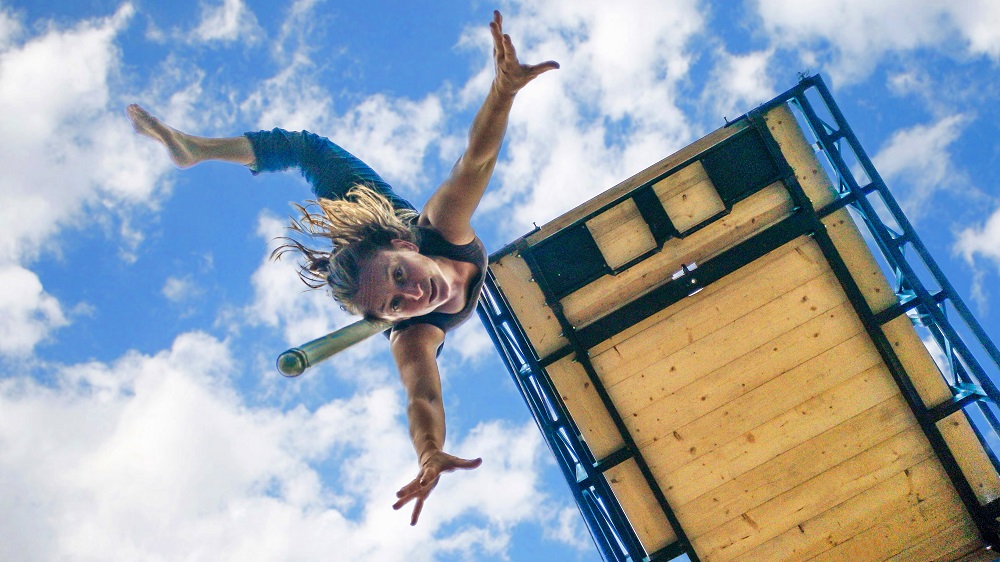 A beautiful bridge appears in the centre of Coventry, Grantham and Worcester, with a gap where the keystone would be. For three days, it is host to pop-up events and happenings that bring people together in new and playful ways including a free immersive headphones experience which offers people an insight into the meaning of the divided bridge.

On the Saturday evening, the bridge becomes the setting for an extraordinary and memorable outdoor performance. Gravity-defying circus acrobatics, dance, comedy, theatre and live music, inspired by local people’s stories, create a thrilling and moving montage of the courage, compassion, imagination and humour needed to bridge a divide.

Bridge is rooted in each community in which it is based. Hundreds of local people will make their own bridges and share experiences of bridge-building, in all senses. Using a specially made kit, inspired by Leonardo da Vinci’s design for a self-supporting bridge, people who wouldn’t normally meet will come together to build a bridge in public spaces in their neighbourhood.

Jane Hytch, Chief Executive Imagineer said: “Bridge takes its inspiration from many different sources, from engineers and artists to people who are bridging social, spiritual and political divides. It is hugely exciting to see the project taking shape with such accomplished engineers, artists, performers and communities.

“At Imagineer we are interested in producing new and extraordinary outdoor work through creative collaborations in order to transform spaces and most importantly for us to build human connections where you might least expect them. Bridge will certainly deliver this as well as creating some unforgettable experiences along the way both for those involved and those who experience Bridge in Grantham, Coventry and Worcester.”

At the centre of the project is a surprising, beautiful and (in engineering terms) almost impossible, broken bridge structure. Sydney based designer Dan Potra (Gold Coast Commonwealth Games 2018 Opening Ceremony, City of Unexpected 2017) worked alongside structural engineer Neal Fletcher, circus specialist Tarn Aitken, engineers from ARUP and a skilled team of theatrical technicians and fabricators to create a workable design for the bridge.

The size, scale and specialist requirements of the bridge has resulted in Imagineer creating a pop-up Creation Space – the likes of which did not previously exist in the Midlands – to enable the development of the Bridge performance, which includes high skill aerial and acrobatic circus performed at a height of up to 12 metres. Imagineer’s pop up creation space, with training facilities in a range of unusual circus disciplines including Chinese pole and Cradle, allows the international cast of 9 circus, dance and physical theatre performers and 3 musicians to rehearse and train whatever the weather.

Orit Azaz, Artistic Director for Bridge said: “Bridge has been imagined by artists; created by designers and engineers and inspired by people’s stories, it really is a project for our time and is already bringing people together in unexpected and joyful ways. Bridge is about the gap between two sides – the bit that is broken or unfinished – and the effort, good humour, courage and imagination of people needed to connect across the gap.

“In order to realise the project, Imagineer have created an unprecedented environment for the creation of the final bridge performance. Bringing together a world-class team, Imagineer’s pop-up creation space is a fantastic achievement. This is hugely exciting, not just for the development of our project but Coventry as a City of Culture and the UK outdoor arts sector as a whole.”

Councillor Matthew Lee, the Leader of South Kesteven District Council, said: “Working in partnership with Imagineer has provided a unique opportunity for local creative artists to develop their skills and for community groups across Grantham, and the wider district, to be part of a wonderful Outdoor Arts experience.

“Imagineer’s Bridge will add further lustre to South Kesteven’s already celebrated outdoor arts offer and is not to be missed.”

Chenine Bhathena, Creative Director at Coventry City of Culture Trust said: “Coventry is a city known for building connections across communities and bridging global divides. This project from Imagineer will be an opportunity for people across the city to come together, share their stories and experience a brilliant new work by this nationally renowned company. We are delighted to be supporting this project. Bridge will bring people together, demonstrate the innovation that exists in the city and throw a spotlight onto the great creativity of artists based in Coventry.”

Further information on Imagineer’s Bridge can be found at www.imaginebridge.co.uk

Bridge is created in partnership with Arup.