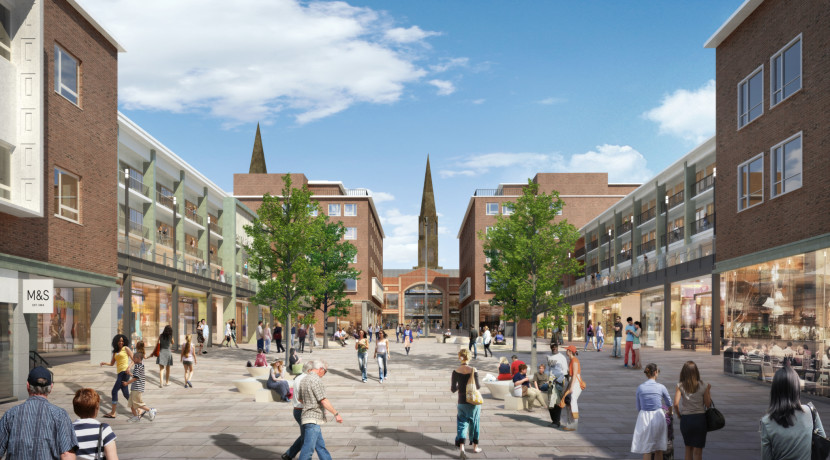 An oasis of greenery and water features are at the centre of a stunning scheme to transform the Upper Precinct in Coventry city centre.

The exciting plans will involve creating large swathes of gardens, fountains and seating as part of a spectacular new public space.

The proposals to create an open pedestrian area throughout the Upper Precinct have been submitted to Coventry City Council by Shearer Property Group and a fund advised by J.P. Morgan Asset Management.

The ambitious scheme will involve removing the existing escalator and footbridges which connect the area to West Orchards Shopping Centre and re-establish the view to Coventry Cathedral. The application also seeks permission to remove the canopy outside the former BHS building.

Street furniture will also be dismantled including part of the ramp near Ernest Jones jewellers to create an open space – similar to Broadgate – by introducing trees, plants and raised water features.

The eye-catching designs are completed by seating areas and timber terraces along with a central pedestrian area in a framed courtyard style design.

The project is being part-funded by £7.75 million from the Government’s Local Growth Fund through Coventry and Warwickshire Local Enterprise Partnership (CWLEP) as part of the overall £11.8 million scheme.

The proposed package of works, which have been developed by Coventry City Council working closely with J.P. Morgan Asset Management and Shearer Property Group (SPG), will lead to the installation of enhanced paving, street furniture, lighting and the restoration of the historical Levelling Stone monument, which is currently located in Upper Precinct.

The work is due to start early this autumn removing the old underground toilet block, which was closed due to disrepair in 1999.

Contractors will then proceed with the re-arrangement of shop units along the northern side of the Upper Precinct and accompanied by the drainage works to the main Upper Precinct area.

Demolition of the footbridges will follow along with the construction of a new staircase to provide a new entrance into West Orchards Shopping Centre and the installation of new feature railings and lighting to the terraces on the first floor overlooking The Precinct.

In order for the scheme to be completed and open ahead of Coventry being UK City of Culture 2021, work will continue at a steady pace to install the new paving, greenery, water features, street furniture and general landscaping.

The new escalator is due to be installed in spring 2019.

Cllr Jim O’Boyle, Cabinet Member for Jobs and Regeneration at Coventry City Council and CWLEP Board Director, said if the plans are passed, it would mean a new era for the Upper Precinct.

“I’m really pleased that we are working with the private sector on this really important project. We’ve been really clear that this must be a top quality scheme – it’s what local people and the Upper Precinct deserve. In fact this plan is very similar to the original Gibson plan – and it will reintroduce water and greenery to the area.

“It will also mean we can clear out some of the later additions that we know people don’t like – including the escalators into West Orchards Shopping Centre which have always divided public opinion. This will help to open up the view again towards Coventry Cathedral.

“The pedestrianisation of Broadgate has been a huge success and we are keen to revitalise the Upper Precinct in a similar way.

“We believe this would help to further rejuvenate Coventry city centre and attract more shops and restaurants. And if we can successfully bid for more cash and make it work we may also, as part of a later phase, be able to remove the Ernest Jones unit. ”

Zamurad Hussain, a board director at the Coventry and Warwickshire Local Enterprise Partnership, said this would see the Upper Precinct area transformed into a vibrant city centre location.

“This is an exciting scheme which will transform another area of Coventry city centre,” he said.

“This public realm work has been supported by the Local Growth Fund which was launched by the government to encourage growth, support businesses and create jobs which are all part of this project.

“Momentum is really building in Coventry as we head towards UK City of Culture in 2021 and this is another part of the jigsaw.”

Stewart Underwood, Director of Shearer Property Group, said: “In the face of increasingly challenging headwinds in the retail market, we are working hard with our public sector partners to bring about the much-needed transformation of Coventry’s prime retail area, Upper Precinct. The submission of the Listed Building application marks the next step in the regeneration of the city centre prior to 2021 City of Culture and a successful outcome will allow us to start on site immediately thereafter with completion second half 2019.”

Stuart Carr-Jones of J.P. Morgan Asset Management added: “We are very excited about the opportunity to upgrade and modernise the Upper Precinct. This initiative capitalises on its central location and excellent footfall to deliver a better environment for Coventry’s patrons and retailers.

“We welcome the opportunity to work in partnership with the Council to bring this project to fruition and admire the drive and ambition showed by its leaders and members.”