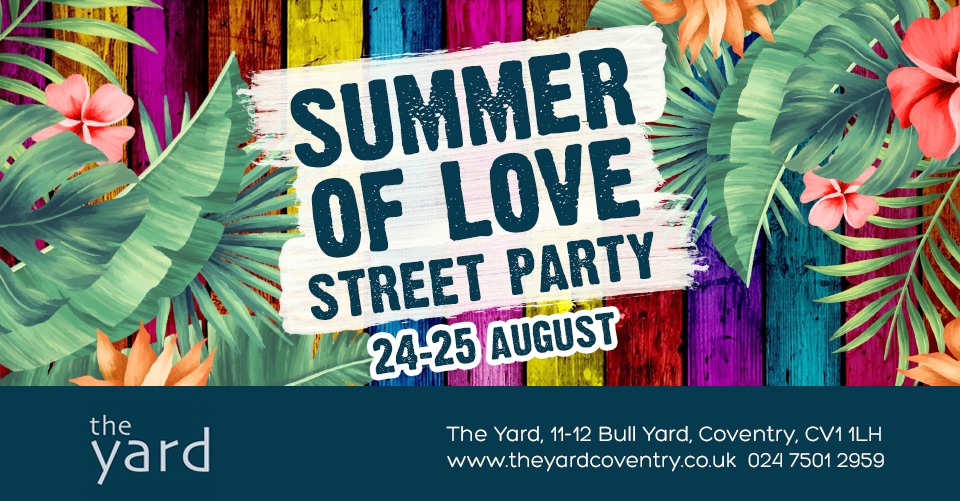 Presenting Summer of Love 2019 at The Yard. There Ain’t No Party Like a Yard Street Party!

S Club Party are to headline the Summer of Love Street Party at The Yard in Coventry on
Saturday 24th August as part of the two-day free festival in the city.

S Club 7 were an English pop group from London created by former Spice Girls manager
Simon Fuller consisting of members Bradley McIntosh, Hannah Spearritt, Jo O’Meara, Jon
Lee, Paul Cattermole, Rachel Stevens and Tina Barrett. The group was formed in 1998 and
quickly rose to fame by starring in their own BBC television series, Miami 7. In their five
years together, S Club 7 had four UK number-one singles, one UK number-one album, and a
string of hits throughout Europe as well as a Top 10 hit on the US Hot 100, with their 2000
single “Never Had a Dream Come True”. They recorded four studio albums, released 11
singles and went on to sell over 10 million albums worldwide.

They will be joined on stage by Cheeky Girls who rose to fame after appearing as
auditionees in “Popstars: The Rivals”, they achieved success in the charts with four top 10
hits between 2002 and 2004. They are best known for their debut single, “Cheeky Song
(Touch My Bum)”, which has sold more than 1.2 million copies worldwide.

Also set to appear are Urban Cookie Collective, Maria Nayler, Amrick Channa, TIN, local
bands plus a host of leading cabaret acts from across the UK.

The two-day event climaxes on Sunday night with a medley of the UK’s best tribute artists
including a full Queen band, Olly Murs, Whitney Houston and Bruno Mars.

The free two-day event is being run by The Yard in celebration of Coventry’s diverse LGBTQ+
community. Summer of Love will fill the Bull Yard with excitement all weekend, with a
massive outdoor stage, three outdoor bars including a vintage horsebox gin bar, two indoor
bars, street performers and live entertainment all weekend!

General Manager Darren Piper-Garcia said; “Our last outside event held back in June for
Coventry Pride was a great success and was really embraced by the city. We’re delighted to
recreate this over the bank holiday weekend with what will be our biggest and best event
yet!”.

The Yard is celebrating being open for two years, during which time it has quickly become
the heart of the LGBT+ community in Coventry and won dozens of awards recognising this,
including being voted as the best Midland’s Nightclub and Bar outside of Birmingham.

Article courtesy of The Yard