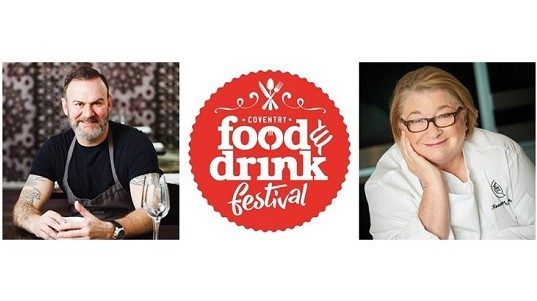 Two of the UK’s most celebrated chefs are set to pass on their culinary wisdom in Coventry as the city centre gears up for an exciting weekend of events in May.

The special guests for this year’s Coventry Food and Drink Festival, which is returning on May 11 and 12, have officially been confirmed.

Glynn Purnell and Rosemary Shrager will be cooking up a storm for the proceedings that are set to be back with a bang for 2019.

It will be a weekend filled with delicious treats and entertainment for foodie fans – but that is not all, as Vélo Birmingham & Midlands will also be taking place on May 12 and the riders will be coming through Coventry, we welcome them and their families in the city centre.

Trish Willetts, director of Coventry Business Improvement District (BID), which is organising the Coventry Food and Drink Festival is excited for the weekend and hopes to see the city centre filled with visitors.

“What a weekend this is going to be for Coventry,” said Trish. “Renowned chefs, food, entertainment and cycling – what more could you want?

“It is absolutely amazing that this is coinciding with Vélo Birmingham & Midlands and having these two events taking place at the same time is hugely exciting.

“It is a great honour that Coventry is involved with the cycling event and we cannot wait to welcome participants on the ride to the city.

“Everyone is welcome to come along and there will be plenty on the menu and the plan is to make the festival bigger and better than ever before, so there will be enough treats for food fans and also hungry cyclists alike.”

Glynn Purnell owns and runs Purnell’s Restaurant and Purnell’s Bistro & Ginger’s Bar in Birmingham. Purnell’s Restaurant was awarded a Michelin star in 2009, which it has retained every year since. Glynn became a household name after taking part in the Great British Menu, winning the show twice and then later appearing as a mentor.

He previously featured on The Great British Food Revival and The Secret Chef, among other television programmes and can regularly be seen on Saturday Kitchen as a guest chef and host.

The nation fell in love with her when she took part in I’m a Celebrity, Get Me Out Of Here. She regularly appears on popular television series The Real Marigold Hotel, and, in 2017, was a judge on The Big Family Cooking Showdown.

Trish added: “We are thrilled to have Glynn and Rosemary coming along to this year’s food festival and I’m sure everyone will be thrilled to see them host demonstrations this year.

“They are both incredibly talented chefs, so it will be amazing to see what they come up with in the kitchen and we hope that many people will come along and give them a very warm welcome.”