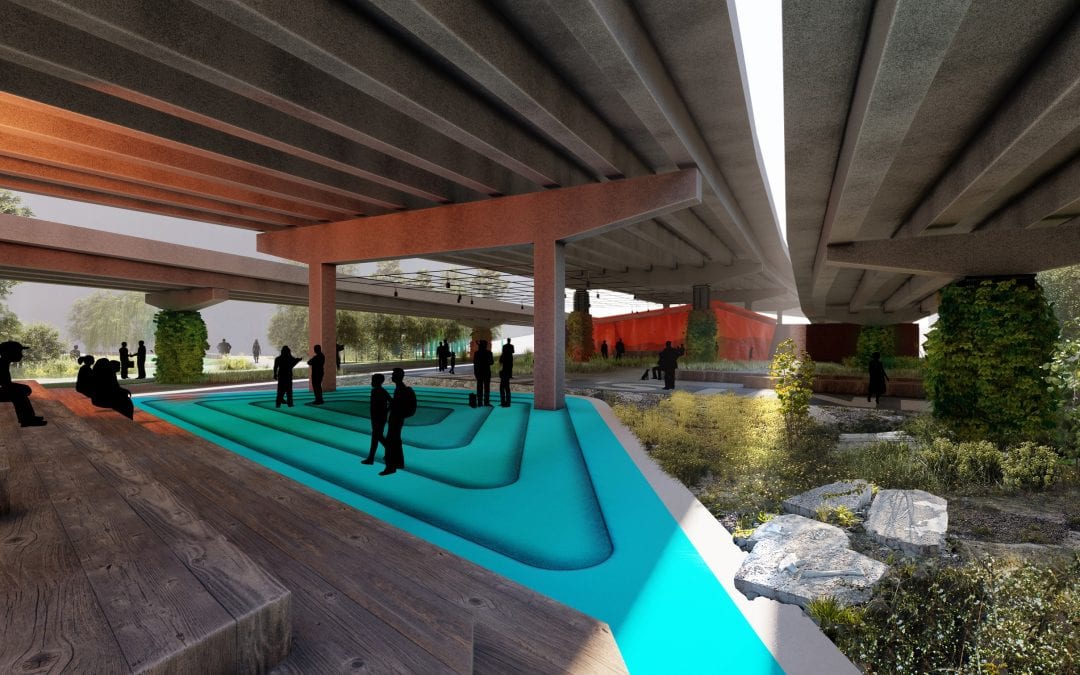 Ambitious plans to breach Coventry ring road and open up the city centre have been submitted by the developers behind some of the city’s most exciting regeneration projects.

Complex Development Projects (CDP) has submitted a planning application for a new linear park which will provide a continuous 1km long green link from the top of Naul’s Mill Park, under the ring road through to Belgrade Plaza in the city centre.

The route follows the line of the culverted Radford Brook which will be recreated as a natural habitat through the former Gas Works site in Abbotts Lane, where CDP is proposing to create a new residential community of more than 700 apartments.

The pedestrian and cycle route passes under a raised section of the ring road, which will be brought to life as a new urban space with a new climbing wall, performance amphitheatre, feature lighting and landscaping.

The route connects the city centre to the Edwardian Naul’s Mill Park, which opened in 1908 following the demolition of the medieval mill in 1889.  Improvements to the park including naturalising the large pond as a wildlife haven are also planned.

The plans will be showcased at MIPIM – the world’s biggest property development and investment show – in March.

If approved, it is hoped that work on the site will begin in late spring and will be completed by the start of 2021, ready for Coventry’s City of Culture calendar of events.

Katie Burn, of CDP, said: “The aim of the proposals is to break down the barriers created by the ring road to re-connect communities with the city centre.

“We are very excited that the plans include innovative re-use of the area under the ring road creating activity in what is currently a fenced off storage area.

“Where pedestrians currently have to navigate a narrow and unattractive path underneath the ring road, the proposals will deliver a broad urban space to create a safe and dynamic environment throughout the day.

“The plans showcase the area’s history, re-creating the culverted Radford Brook and regenerating the beautiful Edwardian Naul’s Mill Park to become a major green asset for the city centre.  This flagship project with highlight the city’s green credentials and help to boost the city’s image in Coventry’s City of Culture year.”

CDP is a member of the Coventry and Warwickshire MIPIM Partnership made up of companies and organisations who represent the area and is also part of the UK Midlands presence at the event which attracts 30,000 delegates.