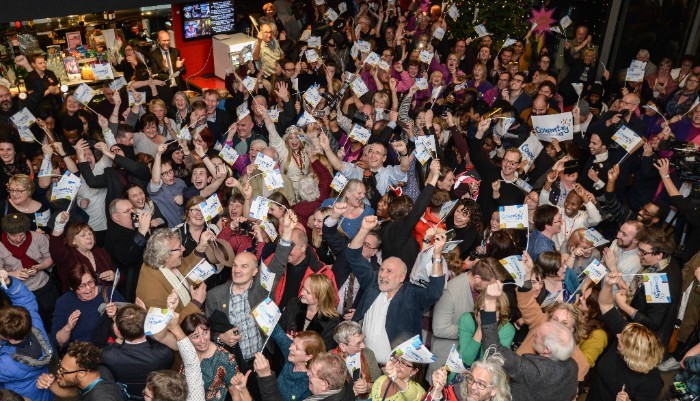 Coventry is gearing up for one of the biggest years in its history after being named UK City of Culture 2021.
The city beat off strong competition from Paisley, Stoke, Sunderland and Swansea to win the prestigious national title and was named the winner live on BBC TV on Thursday night.
Work will start straight away to deliver the plans for an incredible 12 months that were set out in the city’s bid to the Department for Digital, Media, Culture and Sport.
Laura McMillan, Manager of the Coventry City of Culture Trust, said: “This is a win for Coventry, a win for young people and a win for diversity. The economic impact will be huge for the city and the West Midlands.
“It’s been a bid by and for the people of Coventry. It has brought so many people and organisations together and this is just the start. Over the next three years we will ensure that everyone in the city, which has been moving people by cycle car and jet engine, is now moving people through culture.”
Coventry’s programme will include a Streets of Culture programme co-producing work in local communities. The first build-up event will be the UK’s first Shop Front Theatre Festival in March 2018 and the city will celebrate the 100th anniversary of its Cathedral with a major new lighting commission.
A 2.2 mile Ring Road poem is set to one of the digital centrepiece of 2021 along with major productions by the RSC and the screening of the entire works of Shakespeare in iconic locations.
An artist-led festival called ‘Moments of Silence’ will create moments of silence and beauty and reflect on the city’s 700-year-old Carthusian monastery Charterhouse and play on the myth of being ‘Sent to Coventry’.