Coventry BID has a successful re-ballot 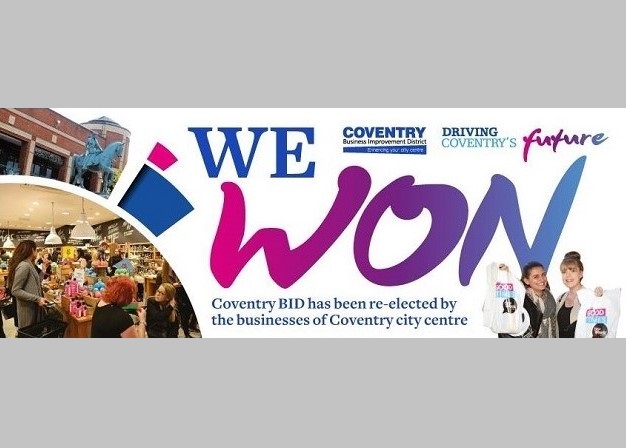 Coventry Business Improvement District (BID) will continue to raise the profile and support businesses in the city centre for another five years.

After a busy month-long ballot period, businesses have voted yes to another five year term for Coventry BID. More than 440 businesses were asked to cast their vote and the result was an 81 per cent majority in favour.

Trish Willetts, Coventry BID manager, is thrilled that the team will continue to drive Coventry’s future, especially at such an exciting time.

She said: “This is Coventry’s time and the Coventry BID team are delighted that we are going to continue to be part of it. There are so many exciting things happening in the city at the moment such as Coventry being named City of Culture, the City Centre South development and also the redevelopment of Cathedral Lanes. We are all so glad that Coventry BID will be around to be a part of everything that is happening.”

“I would like to say a huge thank you for every business that took part in the voting process, it was very much appreciated.”

The BID will now move forward with plans to separate from Coventry City Council and become an independent voice for city centre businesses.

Trish added: “We have had an extremely productive working relationship with the council over the past 15 years and that will not be lost. There is a massive opportunity for all organisations to come together now and make sure that we are all working for the good of Coventry and doing all we can to put the city on the map. But we have to be completely independent with the soul aim of being an organisation that provides a voice for the city centre.”

Plans are already being forged ahead with a number of different events within the city centre over the coming year. Events that the BID team will be working on will include Coventry’s Food and Drink Festival, the Halloween Fiesta, the Christmas light switch-on and many more.

Coventry BID represents businesses that are based within the ring road, but organisations outside of that can become an associate member. For further information about Coventry BID or becoming part of it, contact us via email at BIDS@coventry.gov.uk