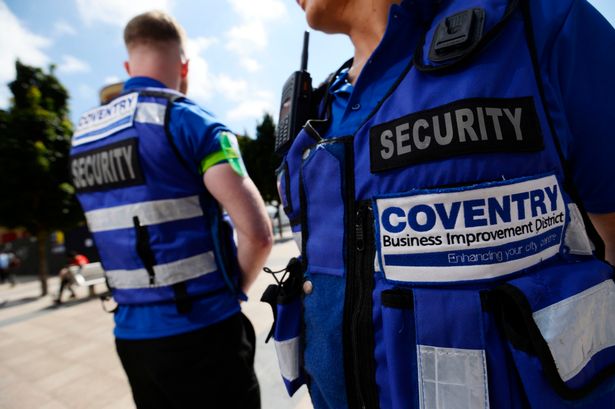 You may have seen in recent months people out and about wearing security vests with stab-proof protection.

These people are the Coventry BID security street patrol team. A team of eight, they patrol the city centre and are there to deal with any issues either the public, or retailers have. They tackle noise complaints, to anti-social behaviour and even knife crime.

We caught up with the man who heads up the team from Coventry BID’s office in Hales Street.

Where did the idea come from?

The idea came when the BID team were putting together their consultation to win their fourth term for the city centre. Businesses were asked what their priorities were and they answered.

Mike Thompson heads up the team of eight security officers in total who split their time and days patrolling Coventry City Centre. They have no powers of arrest or enforcement, but can deal with problems involving drugs and knife crime. However, they are all SIA trained, meaning they have full security guard training.

Mike said: “There has been lots of positive outcomes. There have been incidents where people have been found with a knife and the street team can help with that. Seeing the uniform – so to speak – is enough of a deterrent sometimes.”

Trish added: “We have two on patrol at a time, that start at 1pm and come off at 6.30pm. They are all trained and able to deal with issues in a customer service way, rather than policing. We have a total of eight street patrollers, some men and some women to have that equal balance.”

What they’re there for

The security street patrol aren’t there just for the retailers, they are also there for you. Any member of the public can approach one of the street team on patrol with any issues they have. They are SIA trained can deal with noise disturbance, and anti-social behaviour.

Mike added: “Any issues of people being in appropriate, we can ask them to move on, we deal with anti-social behaviour, drinking and drugs problems too. We work with local youth foundations, because we can give information to them, they can chat with the kids, and then take them under their wing. Members of the public have come up to some of them on patrol and say they are really pleased with it.”

The street patrol has been going since April, but has already had a review and positive feedback. There has been a wide variety of issues the team have dealt with, and some of the most common issues may or may not surprise you.

CoventryLive asked Mike what the most common issues were since the street patrol started. He said: “Anti-social behaviour and shoplifting are probably the most common reported issues we get. The aim is to provide the true picture of crime for the city centre, and by doing that, we can collect that data and deal with it appropriately to find a solution to combat it. We can then say this person has been doing thing they shouldn’t and we can end up liaising with police.”

What is Coventry BID?

If you don’t already know by now, Coventry BID is the city’s Business Improvement District. The aim of the BID is to promote, develop and boost the city centre to make it a great place to work and visit.

Projects are varied and fall under the categories:

These were identified by the businesses in the city centre as their key priorities.

To ensure the BID is delivering results for its contributors it is overseen by the BID board of Directors.  vote takes place every five years to decide whether the scheme should continue. Each business has one vote and in order for the scheme to be renewed there must be a clear majority by both the number of votes received and the total aggregate rateable value of the votes.

After a successful revote in 2018, Coventry BID is now starting it’s forth term, this time as an independent BID. Coventry BID Ltd was formed as the BID separated from Coventry City Council, however there will still be strong partnership working as Coventry BID will be extremely proactive in ‘Driving the future’ of Coventry city centre.

The BID team will be working tirelessly to make sure that it provides an exceptional service for all the companies it represents. They have lots to do with the events in the city centre, such as the food festival and the Christmas light switch on. The BID team are the ones behind bringing you a cleaner, nicer place to shop. They provide a radio scheme for retailers to call for assistance in the event of crime or antisocial behaviour at their premises, and a deep cleaning service to our centre’s streets to make it a cleaner place to shop.