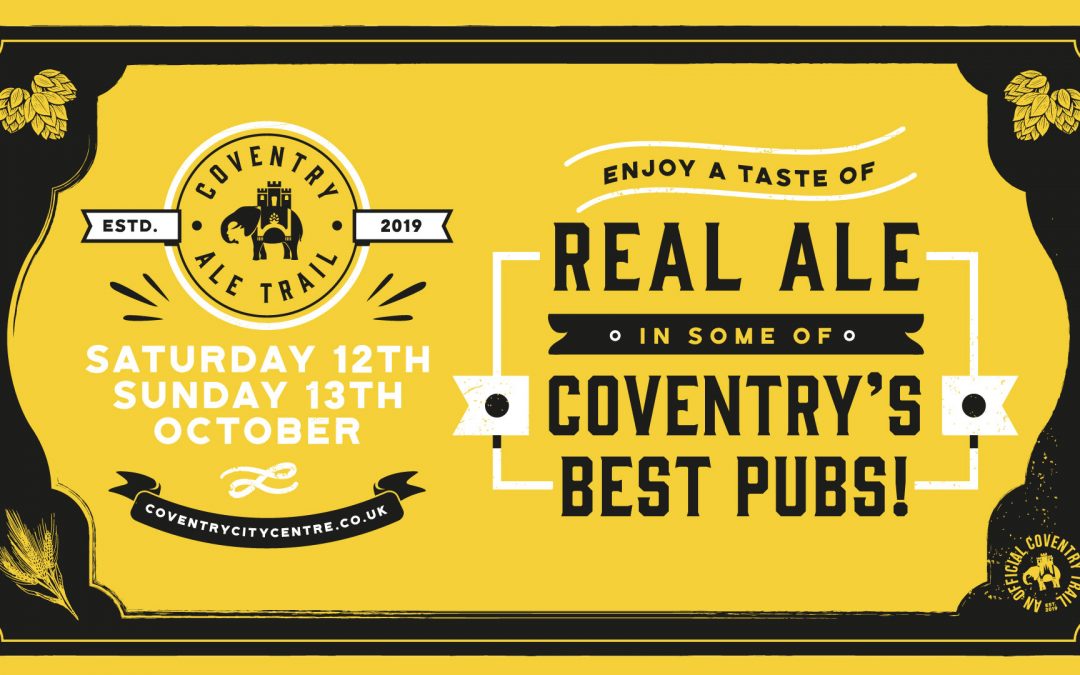 We’re delighted to bring to you the return of the Coventry Ale Trail!

Taking a stroll across Coventry City Centre, the trail gives you the opportunity to taste some superb ales, visit seven fantastic venues, meet some new people and have a great time.

Purchase your ticket, pick any of the seven venues and present your ticket on Saturday 12th or Sunday 13th October to pick up your glass and sample your first 1/3 pint – and don’t forget to get your card stamped!

Then – when you’re ready – move onto the next venue of your choice to sample your next 1/3 pint of ale.

Twisted Barrel
Part of FarGo Village, Twisted Barrel Ale Brewery and Tap House (to give it it’s full name!) the pub – Tap House – has an enormous 23 beers on tap and 15-25 bottled beers at any time. There’s a special edition one-off beer each month and a range of seasonal beers to be sampled. The bar is set within the same space that the beer is brewed, and is open until midnight on Friday and Saturday nights, 10pm on a Sunday.

Castle Grounds
A deceptively large venue, Castle Grounds has large and small areas to enjoy the beers and food on offer in this Victorian building. Open from 11am til 2am on Saturdays and 12pm til 11pm on Sundays, it has all the facilities for any kind of occasion.

The Golden Cross
The oldest pub on the Coventry Ale Trail, the stunning building, previously an Inn back in 1661. The Golden Cross has lovely nooks and crannies, and hosts live music frequently. They cater for many dietary requirements, and have a wide menu to choose from. They’re open 11am until 1am Saturday and 12pm-7pm on Sunday.

Town Crier
With a minimum of 4 real ales, the Town Crier has outside seating on both sides of the pub and home cooked pub grub. With a band playing every Saturday night and an Open Mic night on a Thursday, they’re open til 1am Saturday night and 6pm on a Sunday.

Town Wall Tavern
Situated close to the theatre and described as “a Victorian gem that’s popular with thespians” by The Telegraph, the Town Wall Tavern serves a variety of real ales and food. Consistently popular and with an interesting history, The Town Wall is a traditional, intimate venue in the heart of the city. Open 12pm til 12am on Saturday and 12pm til 10pm on Sunday.

The Gatehouse Tavern
Known for it’s great beer garden, a traditional food menu served in large portions, The Gatehouse Tavern changes it’s guest ales on a weekly basis. Playing all the major sporting events, the Tavern is open 11am til midnight on Saturday and 11am til 11pm on a Sunday.

The Old Windmill
The pedigree of The Old Windmill comes from it’s Medieval roots as an ale house. With 25 cask ales and 10 ciders, located on the interesting Spon Street, and hosting live music and DJs, they’re also famous for their handmade pork pies! Take a seat in the quirky pub from 12pm-1am on Saturday and 12pm-11:30pm on Sunday.